I have to make a confession.  My name is Stephanie Gelder and it appears that I have become a runner! I know, I have no idea how it occurred, but it has!

In March 2012 (I even know the day) the 20th.  The night before pay day, which is the only reason I remember it.  I hopped out of the bath, and looked at myself in the mirror, and saw I had developed a third/fourth chin.  I spent a couple of seconds laughing at myself, then just got hit by the thought that I was laughing at how fat I had become and that was just a step to far.

So that was that. I swore there and then that tomorrow  being pay day I would change. I looked on the internet and did a 1 week crash diet (The GM Diet) and joined Weight Watchers online. There was no way I could go to a meeting so that was it I started to diet.  I was 15st 8 lbs I might have been more but basically my scales hovered just below 100kg i'm not sure if they actually go any higher.

Anyway... It worked, the diet was going well and in April like most of the country I vegged in front of the TV watching the London Marathon, i'd already got the running bug watching the Paris Marathon the week before on Eurosport.  So I hunted around and found my local marathon.  Leicester Marathon, which took place in October.

So I was now still BIG, but under 15 stone and thinking the diet is going well I can run i've always wanted to run but i'm just fat and lazy, well I was trying not to be any more.  So I went into work and looked at the website and on a whim I signed up.  The only thing is when I did this my work colleagues laughed at me and were joking about how many weeks into the training before i quit... Would i do a weeks training or longer, not how far i'd get in the race, but how far in training before I gave up.  It was all very funny and jokey and I loved it but quietly it was true... I was still rather on the large side and would not run to the car in the car park even if it was pouring with rain, What chance did I have running a marathon.

So I got serious I joined runners world, got the magazine on a subscription, and was daft enough to go onto their forum and signup, and say i've got 22 weeks to run a marathon and i cannot run help! and there were loads of people who were really helpful, there were of course lots of sensible comments like shouldn't you set your sights a bit lower.... But nope I had signed up and told my work colleagues I had no choice in this I was committed. How committed... I created a running plan on my.asics.co.uk I also spend a silly amount of money on a snazzy running watch (Which actually turned out to be an inspired idea as I loved using it). Garmin ForeRunner 610 and Asics trainers. My asics plan said run 3 days a week i put in that i couldn't even run 20 minutes, and let it sort it all out for me. Anyway after a bit of tinkering I came up with a plan that said I could get to the end in 5h 36m.

Anyway...... 14th October 2012, along came my Marathon and I ran it.  It was an awesome day. I really should have entered a couple of shorter test events but I didn't so my first organised run was the marathon and it was awesome. 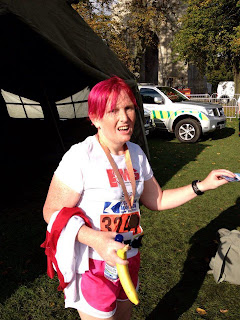 Well. I could have happily ended my story there. I was now down to 10st 6 lbs and feeling great.  I had run / staggered around a marathon in 5:30:22 what more was there to prove.

The problem is that I seemed to have really liked this running lark, I don't really think hurrah a run, but I do find myself getting annoyed / frustrated if I have to miss a run for any reason.  Which is weird.... but i do sort of seem to be hooked I was thinking.

Also it meant i could have the odd treat as I was burning a few extra calories off.  Well .... I thought what's the harm lets keep going....

So i signed up for Milton Keynes marathon in May this year.  Created another Asics plan it said just over 5 hours. I really wanted to go sub 5h but i settled for the time the plan said and had a week off and then started running again.  I kept my same thread going on Runners World, and I just kept running.

Yes, of course I then signed up for Leicester again I worked out if I did two marathons a year that would keep me fit and give me something to strive for. Used another Asics plan. But, this time things got a little complicated, as I sort of got carried away and signed up to run a 50 mile ultra marathon called the LadyBower 50 around a reservoir near Sheffield which was 3 weeks before Leicester Marathon.  So here my plans got a bit messed up.  I ended up doing lots of slow stuff for the Ultra but not really going far enough and not enough speed work to get to the level I wanted for Leicester Marathon, so I was a bit messed up here. But I muddled through with lots of help from the guys n girls on runners world forums.

So Ladybower 50.  Firstly I was the last finisher of the 50 mile event. So yes I was slow, but hey I did it :) I took 11 hours and 54 minutes to do the 50.9 mile course,  The cut off time was 13 hours, so i was comfortably within that.  What I didn't know as I felt totally and utterly alone for the whole of the last 15 mile lap as I didn't see another runner was that i was catching up on another two runners, one who was helping to get another runner who was having problems to the end.  So even though i felt utterly alone like the last human left on the earth :0 it turns out I had been steadily catching this pair and i only finished 2 minutes behind them!  But I did it.  I made some flapjacks and had one of them before hand, at the start but I screwed up and made them to rich. It made me ill and i couldn't actually keep any drink or water down so was really struggling pretty much from the start, when I got to 35 miles it wasn't pretty and I assumed I had taken forever to get that far and that I would just have to stop, but no i still had time. So I drunk a can of flat coke and thought what do i do now.. Amazingly the flat coke settled my tummy down virtually instantly I just felt way better.   I could drink water, and eat again so the last 15 miles for me were actually a lot nicer then the rest ;0 But it was an amazing experience and i want to go back next year :)

So check... i'd done the Ultra, and had 3 weeks to go for Leicester Marathon  Last year it was the 14th of October this year it was the 13th so Literally a year after my 1st i'd do my third.

I had a slight problem in that after my ultra i could barely move!! Stairs were a nightmare. I went shopping a couple of days after the ultra and had to go upstairs in a shop.  I grabbed hold of the rail with both hands and dragged myself up the stairs it was hilarious I looked a mess.  At home it was easy, i just scampered up on all 4's I wasn't proud I just wanted to get up them :)

So i took it rather easy the week after Ladybower then put in a few very gentle short jobs before Leicester I wasn't where I wanted to be but still managed another 19M pb which considering it was pissing down and quite windy wasn't bad.  So 4:36:59 is now my pb.

Next year my plan is two ultras.  The Wall which is 69miles in 24hours from Carlisle to Newcastle going near Hadrians wall in places. That is in June.  I think i'm not going in with any time plans I just want to complete it and have a great event and get to know some of the other runners. I will also redo ladybower again i want to run this hard, but cannot as i have a marathon the week after!!! I know Madness.

For Marathons i want to run at least 2.  I have signed up for Milton Keynes marathon in May, but would love to do another before then, maybe even Paris. in April, and at the end of September I have signed up for Loch Ness.  There is a bloke from Runners World forum that followed my thread and ran it this year as his first marathon, and he wanted to beat my time of 4:56:13 which he did with a 4:55:02? I think it was, which i then beat with my 4:36:59 so we are both seriously aiming for sub 4:30 and we might end up having a bit of a race of it.... Either from the start or trying to sensibly pace each other until at least half way if not 20 miles and seeing where we go from there.  So Loch Ness next year is actually going to be a race! :)

All of this takes me back to my first sentence.... It does appear that even though i'm still not convinced about it. I am I guess now a runner. ;)